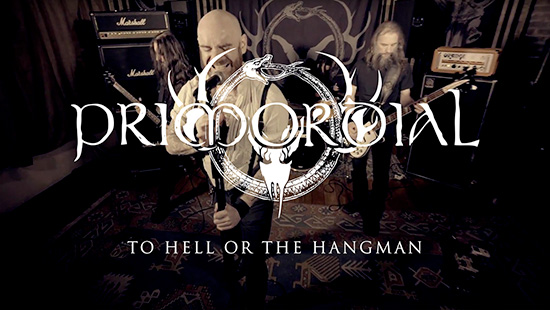 New album ‘Exile Amongst The Ruins’ out March 30th! 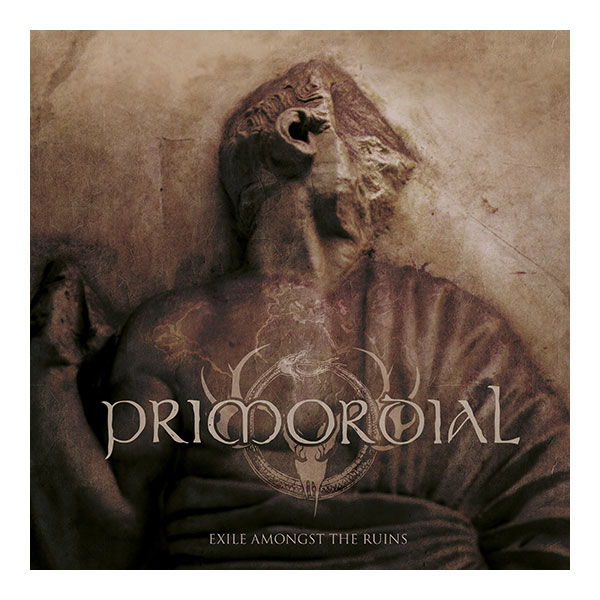 Teaming with producer Ola Ersfjord, who worked on PRIMORDIAL’s 2016 live album ‘Gods To The Godless‘, the record was tracked at Dublin’s Camelot Studios, located adjacent to their rehearsal room.

PRIMORDIAL have now released the 2nd single out of the album. The video for ‘To Hell Or The Hangman’ is directed by Costin Chioreanu.

Comments PRIMORIDAL singer A.A. Nemtheanga: “In 1493 Walter Lynch was hanged by his own father James Lynch, Mayor of Galwayon on the West coast of Ireland for the murder of a young Spanish noblemen who was visiting the family home. He had fallen in love with a young woman by the name of Agnes in the Lynch of household and in a fit of jealous rage one night Walter took the young Spaniard’s life. The story goes that an angry ‘lynch mob’ took to the streets and barred the way to the usual execution spot so James took his son Walter and hung him with his bare hands from the open window into the street…..he was lynched from the hanging sill. ‘To Hell or the Hangman’ is this story through Walters eyes, a tale of unrequited love with a murderous end. Enough drama for you? A curious and strange song for single number two from the new album, dark romanticism! so get on the dancefloor…”

Surf over to metalblade.com/primordial to check out the video for the first single ‘Stolen Years’. At the same location you can pre-order ‘Exile Amongst The Ruins‘ in the following formats:

Once again building upon their signature sound, the follow up to 2014’s ‘Where Greater Men Have Fallen‘ is a more raw, “old school sounding” record than its predecessor. Hitting home with what vocalist A.A. Nemtheanga describes as “a direct energy” and wielding an urgency that is undeniable, the Irish quintet once again effortlessly blend elements of tragedy and might like no one else. Likewise, the evolution in their sound continues to be organic and unforced, ensuring that ‘Exile Amongst The Ruins‘ is essential listening for both their long term faithful and those only now drawn into their world.

‘Exile Amongst The Ruins‘ track listing:
1. Nail Their Tongues
2. To Hell or the Hangman
3. Where Lie the Gods
4. Exile Amongst the Ruins
5. Upon Our Spiritual Deathbed
6. Stolen Years
7. Sunken Lungs
8. Last Call

To coincide with the album release the Irishmen have just announced two special and rather intimate album-release shows in Germany as well as their appearance on the ‘Heathen Crusade‘ European tour with Finnish MOONSORROW as co-headliners and German DER WEG EINER FREIHEIT as support act!