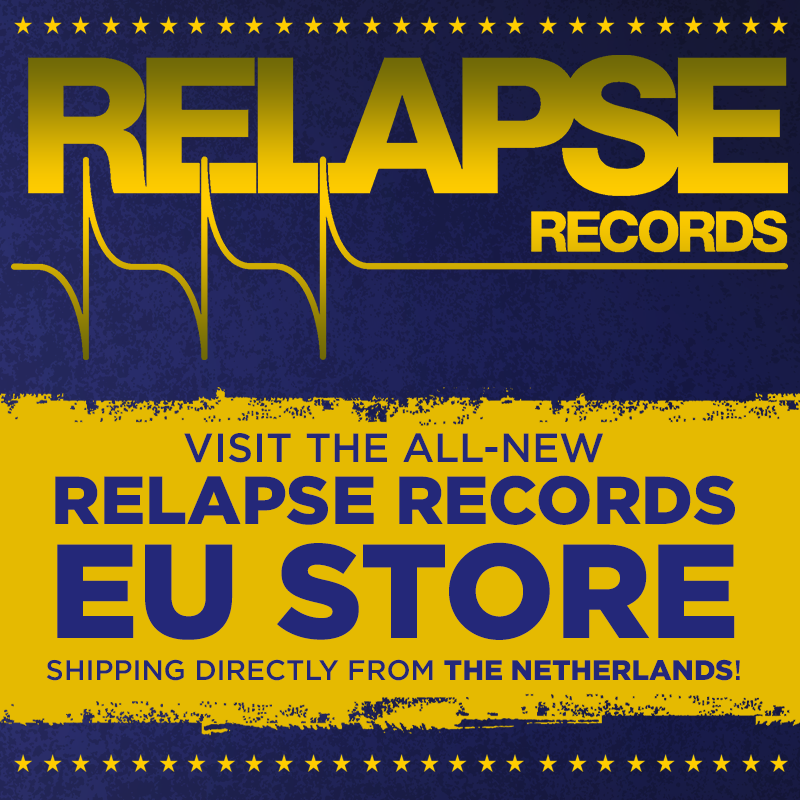 Relapse Records has launched an official European/UK store to offer cheaper shipping and zero custom fees on all products for customers across these territories. The new store, which ships from the Netherlands, is currently stocked with most Relapse new releases and merchandise including DEATH, MYRKUR, OBSCURA, S U R V I V E, THE OBSESSED and others, while new products are being added daily. Check out the store at eu.relapse.com.

Fans are encouraged to sign up for the Relapse newsletter to stay up to date with the latest pre-orders and product info. Sign-ups are available here.

Few generalizations about metal music can be said to be universally true, but that the genre has always been powered by its fans’ intense devotion is one of these, from the founding fathers of heavy metal to the countless microcosms that have emerged over the course of the last thirty years. Accordingly, Relapse Records’ commitment to understanding – and exceeding – its fans’ standards has matched that intensity for as long as the label has existed.

The year 2015 marked the twenty-fifth anniversary of Relapse Records, making it one of the longest-running independent metal imprints of all time. Currently based in Upper Darby, PA and Portland, OR, Relapse is world-renowned for its diversity and dedication to left-of-center music. In the two and half decades since the label’s inception, Relapse has established itself as a name that fuses its passionate and forward-thinking perspective with a strict attention to quality, and as a label whose integrity hasn’t wavered even after withstanding massive changes in metal music & in the industry as a whole.

Relapse Records has always been a label for fans, and by fans. “We sign bands we like first and foremost,” says Relapse Founder & President Matthew F. Jacobson, who has inked deals with bands off of demos (AMORPHIS), out of garages (THE DILLINGER ESCAPE PLAN) and from basement shows (MASTODON).

Relapse Records began as a one-man operation in 1990 in an Aurora, Colorado basement. After convincing a friend’s band to let him put out their record, Jacobson got some lacquers cut. And with Flesh Ripping Sonic Polka, the 1990 7-inch by VELCRO OVERDOSE, Relapse was born.

Jacobson then diligently went to work, constantly disseminating news and information about the fledgling label while calling on a host of like-minded contacts established during his days as publisher of the fanzine Horrendified. Jacobson then established contact with partner Bill Yurkiewicz and the pair began securing deals with some of the top underground acts of the day, including SUFFOCATION, INCANTATION and AMORPHIS.

To accommodate its growth, the label relocated its operations to the remote hub of Millersville, PA in 1991. Accomplishments accrued and improvements were achieved on a near-daily basis. In 1993, Yurkiewicz and Jacobson – both huge fans of post-industrial experimental music, electronic, ambient and noise – started the now-defunct Relapse offshoot Release Entertainment to issue music within the aforementioned genres.

Along with the label’s continued growth came a mailorder and wholesale operation that would quickly become the most inclusive underground distribution service in America, carrying an exhaustive supply of extreme music recordings, merchandise and publications from around the world. That mailorder service later grew into the renowned Relapse.com webstore.

Never one to put all its eggs in one basket, Relapse branched out into print publications as well: the 1996 establishment and eventual fourteen-year tenure of the Resound Music Resource Guide provided fans with direct access to all things underground in terms of (anti)art and (counter)culture in an all-in-one compendium featuring music, merchandise, and breaking news. As it provided access to releases and products from many labels besides Relapse itself, the Resound Music Resource Guide proved an integral part of the early 90s’ metal scene, providing worldwide access to merch and information available nowhere else.

2002 found Relapse relocating to its current headquarters of Upper Darby, PA in suburban Philadelphia. In January 2003, the label held the Relapse Contamination Festival at the Trocadero Theatre in the label’s hometown of Philadelphia. The critically-acclaimed fest, which was comprised entirely of Relapse artists, featured headlining performances from notables like NEUROSIS and THE DILLINGER ESCAPE PLAN alongside up-and-coming support acts such as MASTODON and HIGH ON FIRE.

Over the years, Relapse has also demonstrated an inimitable capacity for producing professional releases that don’t forsake their obscure or DIY origins. Few labels strike such a well-defined equilibrium between the fun and the fanatical, the credible and the commercial, the raw and the respectable. Crucially, the label hasn’t forgotten its roots, even as time has passed. In 2011, Relapse partnered with the Schuldiner family for an extensive reissue campaign of Chuck Schuldiner’s music including works by DEATH, CONTROL DENIED and MANTAS, and in 2014, Relapse signed Florida death metal progenitors OBITUARY.

Today, Relapse Records shows no signs of stopping any of the innovative practices it has been lauded for in the past. One excellent example: what could be a better way to counteract the decline of the physical music industry than to partner with the pioneers of the digital one? As the first label to partner with trailblazing music platform Bandcamp, Relapse helped get record labels on board and independently spurred the streaming movement, which has helped put more dollars into the pockets of independent artists than ever before.

With a current roster that includes universally-recognized artists and genre leaders such as RED FANG, NECROPHAGIST, OBITUARY, PIG DESTROYER, DYING FETUS, TORCHE, and INTEGRITY, highly-regarded newcomers including WINDHAND, NOTHING, MYRKUR, OBSCURA, S U R V I V E, and KING WOMAN, and an alumni lineup that includes heavyweights like BARONESS, NEUROSIS, MASTODON, HIGH ON FIRE, THE DILLINGER ESCAPE PLAN, NEUROSIS, BRUTAL TRUTH, and NILE, the cult of Relapse advances its unwavering resolve and aesthetic, providing longtime devotees and enthusiastic new fans alike with an incomparable cross-section of today’s most innovative prime-movers.

As the world of heavy music continues its staggering upswing, Relapse further cements its reputation for surpassing fans’ expectations. Through its undying dedication to the development of its artists, its wealth of forward-thinking, creative ideas, and its zealous cross-promotional panache, Relapse Records is indeed forging the future. The next twenty-five years stand to be just as impressive as the first.